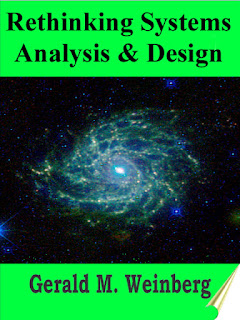 Nothing New Ever Works

The best "review" of one of my books is a testimonial about how the book has been useful. Here's a letter from Jon Jagger about how a law from The Secrets of Consulting helped him help his son, Patrick, who was ill.


Hi Jerry,
I just had a moment of enlightenment about the New Law I wanted to share with you...

I was giving Patrick, my son, some calpol (liquid paracetamol - he's ill off school today).
The bottle had a new plastic widget in the top.
With the bottle there was a new small syringe with a new plunger.
This was a new design - instead of simply pouring the calpol onto a teaspoon you clearly had to fill up the syringe.
Try as I might I could not get the syringe through the hole in the plastic widget in the neck of the bottle.

So was it The New Law - Nothing new ever works?

My beautiful wife Natalie came to my rescue.
It did work and she showed me how.

I just re-read The New Law from your book.
I noticed that all the examples, the coffee maker, the pills, the car-battery, the car, the hospital procedure were examples where the new thing was genuinely not working. But in my case the new thing WAS working.  It was ME that was not working!

From this I have realized that

1) It's easy to think the emphasis in "Nothing New Ever Works" is on the word "new" but it's equally on the work "works"!

2) Something being new is a relationship

3) Something working is a relationship

Also, it might give some insight into the question you pose at the end of the New Law...

"Everyone knows that new things never work."
"Then why is everyone obsessed with changing everything for something new?"
"If you answer that, you'll have something worth writing about"