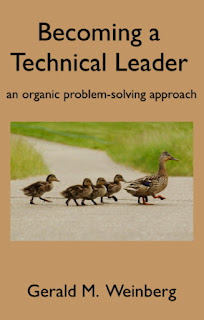 They might not be able to find that next solution, or find it right now. It may not be worthwhile finding under the present circumstances. But it's there, waiting to be found. And someone will find it, someday—if they have not been brainwashed by those darn psychologists. That's ultimately the principal reason we want our software developers and testers to work in teams.
Posted by Gerald M. Weinberg at 12:13 PM 4 comments