What do you do when a kid beats your solution?

We were asked, "Has a software engineering interviewee ever come up with a better solution than the expected best answer?"

The question told me that the one who posed it hadn't done many interviews. As an interviewee, I did this often, though it was often met with defensiveness from the interviewer.

As an interviewer, it happens to me all the time, and I've tried awfully hard not to be defensive as I'd seen so many interviewers become.

Once on the job, too, software engineers frequently come up with better answers than their managers, teammates, or team leaders knew and expected. Or, I must admit, better than their consultants.

When this happens in any of these situations, it's important for the interviewer, manager, team leader, teammate, or consultant to accept the answer graciously, thanking the person for teaching them something new.

Even if the new idea isn't "better," if it's new, it's an opportunity to learn, so you don't want to spend your efforts trashing the idea. Just take in into your mind and offer thanks. 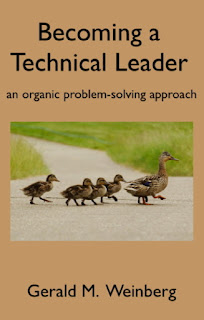 Generally, the most powerful learning occurs  when someone produces a better solution than you had imagined. If your ego cannot deal with “better” or even “different” solutions to problems you pose, you have no business being in a leadership position in software engineering.

Some Advice on Advice

I was asked, "I'm very bad at taking my own advice but love helping people with their own personal issues. Does that make me a hypocrite?"

You seem to equate “advice” with helping people, but there are many other ways to help people without offering advice. And, of course quite frequently, even the best advice doesn't help at all.

(Note that I wrote “offering,” not “giving.” You offer, but they need not accept. Nor do you have to accept your own advice. You test it in your mind, or with small actions, and either follow or not, depending on the test’s outcome.)

If you like helping, try asking people what kind (if any) help they want from you. Perhaps they merely want a friendly listener. Or a pat on the back. Or a kick in the rear. Maybe they want you to clean their house. Or carry their heavy package. Maybe they just want a smile.

Stop worrying about labels like “hypocrite,” and start seeking ways to help people the way they want to be helped. Forget the advice business. As Ambrose Bierce says in The Devil’s Dictionary, “Advice is the smallest common coin.”

What motivated you to learn to code?

I received an interesting question, today: "What motivated you to learn to code?"

Maybe it's old age, but my memory for ancient events seems to have improved. I remember quite clearly those days, back in the 1950s, when I worked as a "computer." That was my job title, computer. I did physics calculations with pencil and paper—and an eraser.

At that time,I had never seen a computing machine, nor another person who had ever seen one.

When I left graduate school, I went to work for IBM in San Francisco. Nobody else in the IBM office had ever seen a computing machine, at least not a stored program one. We had a machine with 10 wireable instructions (IBM 604) and one 10-digit word of data storage. I was motivated to learn to code that machine by a one-dollar bet that I could turn on all the lights on the console. I won the bet.

The first stored program machine (IBM 650, with 1,000 words of drum memory) was due in the IBM office two weeks after I started there. I was given the assignment of learning how to program it, as nobody else in the office had a clue. I learned to code by reading the machine manuals for two weeks.

It was the thrill of a lifetime.

What were some jobs that existed 50 years ago but have largely disappeared today?

We often hear that we're in a time of change, but this observation isn't really news. We've been in a time of change for my whole lifetime, and well before that. Many jobs that once existed are no longer available, and many have even disappeared from memory.

We were challenged recently to recall some jobs that have disappeared in the past 50 years, and it was great fun reading all the answers, many of which described jobs I once held back in my youth. I go back a bit more than 50 years, though, so I have a few more to add.

The first, most obvious omission that popped into my mind was the iceman. In the 1930s, my family had an icebox (not a refrigerator, but an actual box that held a block of ice). The iceman’s horse-drawn wagon would come around and be surrounded by us kids, hoping to get free shards of ice caused when he cut up little blocks to fit our iceboxes.

Another job only briefly mentioned was typesetting. I never held that job, but I was trained for manual typesetting for a semester in high school. At least I know where terms like upper-case and lower-case come from.

Someone also mentioned keypunch operator, a task (not a job) that was often done by prisoners who were literally chained to their keypunch machines. What wasn't mentioned, however, were key verifier operators. Not many people today have ever seen a verifier machine, let alone even know what one was.

Even before my time, there were jobs that disappeared, but which I read about in a nineteenth century book about jobs for women. The final two chapters in the book were about a couple of sure-fire women’s jobs for the future (1900 was then the future).

First chapter was about telegraph operators. The chapter “proved” that there was a great future for women because they could operate a telegraph key at least as fast as men (and the telephone had yet to be invented).

Second chapter was about picture tinters. There was, of course, no color photography, and it wasn’t really even conceived of. Women were supposedly much better at coloring photos because of their “artistic bent” and their more delicate hands. Though there are a few photo tinters still around today for special jobs, it’s not a career with a great future.

It's fun to think about these forgotten jobs, but they're also a source of important knowledge, or perhaps even wisdom. Job disappearance is not some new phenomenon caused by computers. It's always gone on through history. True, some jobs lasted a long time, so long that they were passed down from generation to generation, even becoming family names, such as Smith, Turner, Eisenhower, Baker, and Miller. (See, for example, <Meaning of Surnames> for hundreds of examples)

Some of those jobs still exist, though often modified by new technology. Do you still recognize Fuller, Chandler, or Ackerman? And many others have largely disappeared, remaining only in some special niche, like photo tinters. Do you know anybody named Armbruster who still makes crossbows? Well, you probably know a few Coopers, but how many of them still make barrels?

So, what's the lesson for your own future? If you're as old as I am, you probably don't have to worry about your job disappearing, but even my "job" as a writer is changing rapidly with new technology. Even if your type of job doesn't disappear entirely, you will be faced with changes.

I'd suggest that you take advantage of the rewards of specialization but invest a small percentage of your time to learning something new. Always. Keep you mind flexible for a future none of us can predict.

p.s. Minutes after I posted this blog, several readers wrote:

Your first job, "computer" did also disappear. How long was that job around? (Kind of surprised you did not mention it in the blog post.)
----
Well, that's shows I'm a human being. What's that saying about shoemakers' children going barefuot? It never occurred to me to consider my 'computer' job as disappearing, but of course it has been largely taken over by machines. Thanks, readers.

Oh, and some more, including switchboard operator, another job I had.