In many IT installations today, the number one problem is program maintenance.
Although the total problem is far from simple, there are a number of relatively simple ideas that can be applied immediately to furnish "prompt relief." One such idea is the disposable program.

The idea of disposable programs is not new. Every programmer has written code that was to be used once and then thrown away—codes such as:

1. First-cut subroutines, as for simple, quick formatting of output.

4. Research programs to probe some peculiar feature of the programming language, operating system, database, or other "black box."

If you consider these ﬁve examples relative to your own experience, you will notice two categories:

DISPOSED: test drivers, research programs, and hardware testers. That is, though all are thought of as single use programs, the KEPT routines tend to be held, somewhere, "just in case." Only the DISPOSED programs are actually discarded, whether they should be or not.

Can you recall an instance when you wished you had actually retained a discarded program?

And can you recall cases of KEPT programs you devoutly wish you had destroyed when you had the chance? These are the programs you see and curse almost every day, as their user phones, pleading for "just one little change."

Perhaps we would immediately begin improving the maintenance situation by applying two simple rules about "one- time" programs:

Consider the examples once again; you'll notice that the underlying principle seems to be:

But why not just keep all programs, for all time? There are many reasons why a program brought out of hibernation could incur costs:

1. The hardware environment has changed.

2. The system software environment has changed.

3. The size or format of the data has changed.

4. The human environment has changed.

5. Some part of the program or its supporting material has been lost or damaged.

So it does cost to rerun an "unchanged" program, and the longer the period of hibernation, the greater the cost. But you already knew this—we all know this. Then why, oh why, do we keep tumbling into the same trap? And how do we get out, or stay out, of the trap.

Well, we'll watch for readers' ideas on these questions, and next blog entry, I'll give a few ideas of my own.
Posted by Gerald M. Weinberg at 2:42 PM 3 comments 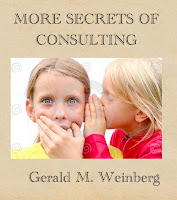 Who is Right, and What is to Be Done About It?

A management consultant, whose client was an international manufacturer, was asked to evaluate an inventory management procedure that the client had used with stunning success in their French operations. As part of his study, he wanted to compare the performance of the French procedure with procedures used in other locations, using historical data from several countries. A programmer with a strong management science background was given the job of programming the simulation of the French procedure.

When the consultant received the results he could not reconcile them with the ﬁgures supplied by the French company. After extensive checking he initiated a series of long telephone calls to France, suggesting that perhaps the procedure had not actually performed as well as they had claimed. The French management took offense at the implication of incompetence.

The French manager complained to the manager who had hired the consultant. Tempers mounted and international relations were strained to the breaking point.

By sheer chance, someone examined the programmer's simulation program and noticed that one term was missing and a second term was negative rather than positive. These findings led to a full technical review of the formula as translated. The review showed that the programmer's formula did not match the formula supplied by the French.

Note to Readers
Now, for you readers, the question is this:

"If you were the consultant, how would you handle this situation going forward?"

If I receive a few comments, I'll publish the rest of the story—what actually happened.

As an old guy who's been around computing since 1950, I'm often asked about early history of computing. I appreciate efforts to capture some of our history, and try to contribute when my agin memory doesn't play tricks on me.

Back in 2003, Craig Larman and Victor R. Basili compiled an interesting article, Iterative and Incremental Development: A Brief History. I made several contributions to their history, but they did much, much more. Here's a small sample of what I told them:

We were doing incremental development as early as 1957, in Los Angeles, under the direction of Bernie Dimsdale [at IBM's Service Bureau Corporation]. He was a colleague of John von Neumann, so perhaps he learned it there, or assumed it as totally natural. I do remember Herb Jacobs (primarily, though we all participated) developing a large simulation for Motorola, where the technique used was, as far as I can tell, indistinguishable from XP.

When much of the same team was reassembled in Washington, DC in 1958 to develop Project Mercury, we had our own machine and the new Share Operating System, whose symbolic modification and assembly allowed us to build the system incrementally, which we did, with great success. Project Mercury was the seed bed out of which grew the IBM Federal Systems Division. Thus, that division started with a history and tradition of incremental development.

All of us, as far as I can remember, thought waterfalling of a huge project was rather stupid, or at least ignorant of the realities… I think what the waterfall description did for us was make us realize that we were doing something else, something unnamed except for "software development."

Larman and Basili's article has a whole lot more to say, and as far as I know, is an accurate history. I strongly recommend that all in our profession give it a good read. We should all know these things about ourselves.
Posted by Gerald M. Weinberg at 9:21 PM 3 comments