This is why I wrote the book, "Managing Yourself and Others."

Mostly, it's about congruence!

Amplify’d from techcrunch.com
See this Amp at http://amplify.com/u/bxclo
Posted by Gerald M. Weinberg at 4:10 PM 0 comments

Knowing What to Leave Alone 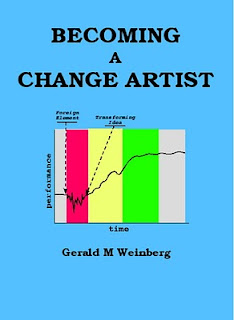 I adapted this blog post from my new eBook, Becoming a Change Artist This little case example followed a number of other examples, as a kind of corrective to some peoples' ideas about how a change artist operates.


I don't want to give the impression that change artists are rushing around an organization inflicting help on everyone. Perhaps the toughest skill for a change artist to learn is the skill of knowing what people and what situations to leave alone.

For instance, there's a Vietnamese proverb that says, "While it is notable to assist a stricken elephant in rising, it is foolhardy to catch one that is falling down." Change artists need to learn how to recognize whether a person or department is willing to help themselves rise.
For instance, change artists should have lots of potentially transforming ideas on hand. Most of these ideas are on the process level—that is, processes for finding ideas. Such processes might include
A good example of combining of ideas is the process of connecting what the individuals want with what the organization or the change artist wants. If the change artist thinks the elephant might be falling down, she might make her presence (what they want) conditional on their participation (what she wants). Or if management wants the group to take a risk, the change artist might negotiate some kind of insurance to give the group safety, such as extra time in the schedule, relaxed specifications, suspension of the usual measurements, or a guarantee of their old jobs back if the project flops.

Here's an example of this kind of negotiation. In an organization producing electronic equipment with embedded software, top management threw in a foreign element by mandating certain process improvements. Some of the more traditional managers were highly technical engineers, and claimed that the other managers, being service engineers, weren't sufficiently technical to do process improvement. Thelma, a change artist, was supposed to facilitate the entire group of managers working on the improvements, but she faced a problem: Who should have the job, given that the technical managers weren't doing it, and the service managers wanted to do it?

In other words, just like in artistry with a canvas, paint, and a brush, sometimes the empty spaces are the most important part of the work of art.

To perfect your change artistry, you might want to participate in this year's AYE Conference.
Posted by Gerald M. Weinberg at 9:06 PM 0 comments

Are you a permission giver? Feynman was.

Amplify’d from www.theamericanscholar.org
See this Amp at http://amplify.com/u/bwosl
Posted by Gerald M. Weinberg at 4:06 PM 0 comments

How to Manage Teams Congruently


Two general social-psychological observations about group behavior are especially relevant to the crisis-ridden programming team. First of all, it has been observed that in a crisis, members of a group more readily accept relatively strong leadership attempts. At the same time, however, the group becomes less patient with would-be leaders if their direction does not produce effective solutions to group problems rather quickly. Thus, in a programming team—which is possibly in a continual crisis—leadership patterns may be in constant flux. Because of this reshuffling, the more difficult the task is, the more the team comes to follow those leaders who can actually steer the team most effectively.


We can see, then, why the democratic—or perhaps we should say "technocratic"—organization is such a natural one for a programming team. When selecting programmers for teams, we should try to choose people who will fit well within such a self-shifting structure—neither too dominant nor too passive. In training our programmers, we should try to teach them how to follow able leaders and how to grasp leadership opportunities when they themselves are the most qualified in the group. And during the life of a team, we should try—if we are on the outside—not to interfere in those democratic processes which, though seemingly traumatic for the team and its members, will in the long run lead to most effective team functioning.


Indeed, once the team is selected and operating, the wise manager placed above it will adopt a "hands-off" policy with regard to its internal structure and structure change. When, as so often happens, team members come to him to lend an authoritative opinion on their side of some argument, he would do well to follow the pattern of the old rabbi who was sitting in his study one day when an obviously agitated man came to see him. The man told him a long story about an argument just concluded with his wife. When he finished his story, he insisted that the rabbi tell him whether he or his wife had been right.


"You're right," said the rabbi, and the man left the house beaming. Soon, however, the man's wife appeared—even more distraught than the man had been.


"What do you mean," she insisted, "saying that my husband was right? You haven't heard my side of the story." And she proceeded to relate her side, finishing with a demand for a new judgment.


"You're right," said the rabbi, and the wife left satisfied. The rabbi's own wife, however, was not satisfied, for she had overheard both stories and both answers.


"How can you do that?" she demanded. "You told the husband that he was right and the wife that she was right. They can't both be right."

[This little tale is adapted from my books: The Psychology of Computer Programming and Managing Teams Congruently.]
Posted by Gerald M. Weinberg at 10:07 AM 2 comments

A fine article, but only a sample

I chose just one of the many fine entries on the TESTHEAD blog. Read this one, then try some of the others. Michael can write--but most of all, he can think!

Amplify’d from mkl-testhead.blogspot.com
See this Amp at http://amplify.com/u/bsxk5
Posted by Gerald M. Weinberg at 10:50 PM 1 comments