Roger Ebert, the film critic, died today. I don't know what I can do to replace him in my life, because  for the past 30+ years, he was the one I went to when I didn't know which movie to watch (or not watch).

I will need to replace Roger with another film critic, but I don't know how to replace him because Charlie Seashore died last month, followed a few days later by Edie Seashore. For the past 30+ years, Charlie and Edie were the ones I went to when I didn't know what to do about anything in my life, especially things more important than movies.

Edie and Charlie and I were connected in a plethora of ways. Though we lived thousands of miles apart, we visited each other often. Aside from these personal friendships, we frequently were consultants to each other. I assisted in some of their workshops; they assisted in some of mine. These interactions were always of high intensity and deep learnings, but perhaps the most intense, the most educational, were working on our feedback book, What Did You Say?.

With the perspective of several decades, I'd have to admit that the book was a success. Though we spent not a penny on promotion, What Did You Say? became a word-of-mouth classic, selling tens of thousands of copies and changing a similar number of lives. We probably would have sold even more, but the book was hard to find in the USA–and virtually impossible to obtain overseas.

In recent years, with the changing technology in publishing, we began talking about, then working on, an electronic (ebook) version of What Did You Say?. We corrected numerous small errors and added two entirely new chapter. The work went slowly because all three of us were immersed in our other work, especially visiting clients and leading workshops. And then they died.

Because Edie and Charlie were two of the world's greatest consultants and trainers, they were always incredibly busy–and that busyness created the one flaw in their work: They seldom had the time to sit down and write about the magical things they were doing with their students and clients. Without a massive collection of written words, only a relatively few of us lucky ones had a chance to share their magic.

In my shock, my first reaction was to drop the entire project, but clients kept asking about how the book was coming along. It took me weeks just to face filing away all our drafts. The filing was so painful and slow, I just knew I could never finish the book without the rest of my team. As I filed, though, I realized that, except for some final polishing and formatting, we had already finished. 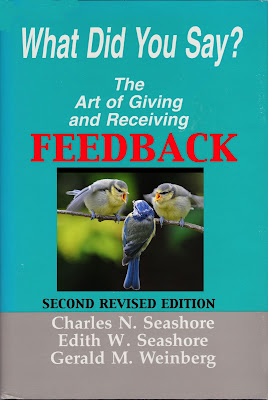 I knew then that I had to do that polishing and formatting. The ebook could be the way for thousands of people to come to know Charlie and Edie, if only in a partial way. So, I put almost everything else aside and turned my editorial crank–grinding out what became the Revised Second Edition of What Did You Say?. I invite you to get yourself a copy and get to know the Seashores. (And learn a few things about feedback.)

Thank you for finishing the book.

I'm really looking forward to reading the book! Is there any chance you'll sell it through Leanpub or will Amazon Kindle be the only option?

Dennis,
Right now, I plan only Kindle and Smashwords, and I'm having trouble with Smashwords.

Leanpub would require an entire reformatting into their Markdown language, which is a great pain.

I happened upon this over the weekend, and was saddened to see that it's no longer available even for Kindle. The Amazon page says: "This book is currently unavailable because there is an issue with its description, content, or formatting."

Any idea when it will be available again?

Michael,
The ebook version is now available on Smashwords and Kindle. (though they may give misleading messages because of a controversy over formatting, a controversy that doesn't affect the content of the book).