Continuing where I left off in my previous blog, you may recall that we were discussing the value or otherwise of programming experience in terms of productivity. I had suggested there was an important truth to be learned from the study of productivity models.

"There is a perception in some tech circles that older programmers aren’t able to keep pace with rapidly changing technology, and that they are discriminated against in the software field. But a new study from North Carolina State University indicates that the knowledge and skills of programmers actually improve over time—and that older programmers know as much (or more) than their younger peers when it comes to recent software platforms."

This study didn't surprise me. Nor did it surprise many of my programmer friends. Why, then, do so many managers still believe that older programmers are less skilled than their younger co-workers?

The answer lies in fallacious reasoning. Let's see how that works. Pretend we were able to follow the careers of 100 programmer trainees who started together six years ago. Each year, some of them will drop out of programming because they don't like it or can't do it very well.

These dropouts will be high at the beginning, then decline as salaries rise to overcome any residual dislike.

After a year or two, some of the better performers will be offered "promotions" outside of programming. Some will accept. Some will decline, preferring the work they know and do well.
Generally, though, the promotion will be offered principally to those who are the better programmers—whether or not they would be the most qualified to be analysts, managers, database administrators, or what have you.

The following table shows how the allocation of these 100 trainees changes over a six-year period. 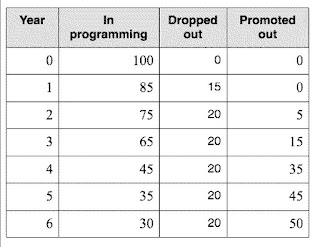 The figures are not meant to be exact, but only suggestive of trends.

Now suppose we break down this table into two tables, each starting with 50 of the trainees. First, we have the "least able" 50: 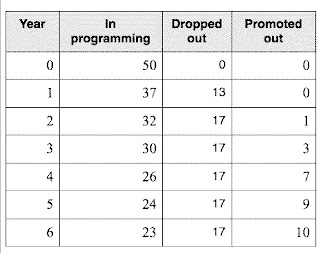 Now consider the most able"50: 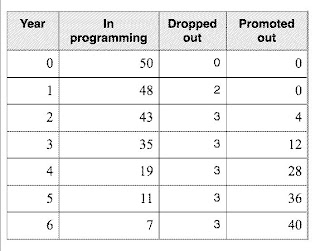 In other words, according to this model, after six years, as a result of personnel practices, about 77 percent of the programmers come from the lowest 50 per cent in original ability. The very worst have mostly dropped out early, but not enough to counteract the loss of the better ones.

Most of those better ones have been promoted out to to meet rapidly growing demands for experienced personnel in non-programming jobs. This loss is the result of two fallacious management beliefs:

2. There's no point keeping older programmers in the trade because the younger ones are better.

Misled by these two mistaken beliefs, managers keep promoting out their most experienced programmers (except for those few who refuse the promotions).

As an experiment, you might try substituting your own company's personnel policies into this model to create your own tables.
You may find, as many have, that what they are measuring, when they measure "years of experience", is actually combination of "years passed over for promotion" and "years refused to take a promotion.

There's much more to the complex subject of experience, but these simple models are food for thought. Perhaps you'll have them in mind next time you're interviewing a candidate—or even next time you review your personnel policies.
Posted by Gerald M. Weinberg at 9:53 AM

I would like to see how this relates to Tester's. I think there might be a similar pattern. Especially for those testers who move from manual to automation.

At least from my view this is what is starting to occur.