A Conventional but Flawed View of Leadership

Contuining my excerpts from various books, this week I'm posting this segment from Becoming a Technical Leader. 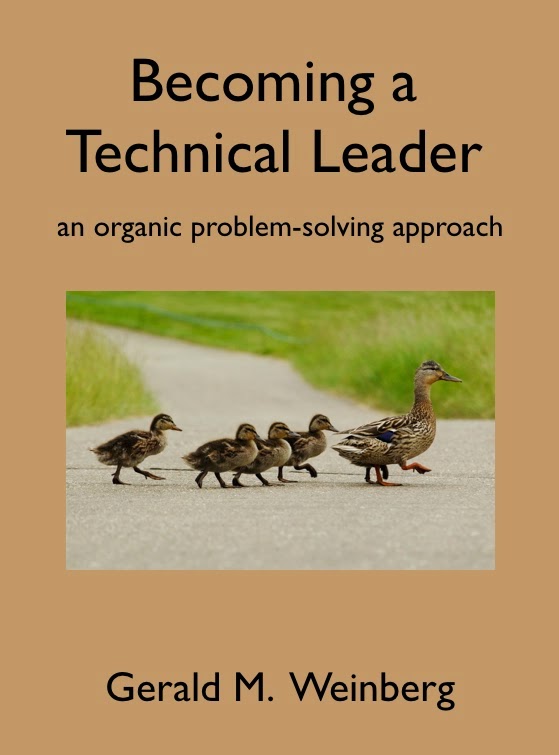 Psychologists and management theorists have dozens of models of leadership, with a typical one of their texts offering this explanation:
There are two principal ways to identify the leaders of a group:
1. asking the members to identify which members they regard as most inﬂuential in directing the group, or
2. asking observers to name the most inﬂuential members, or to record the frequency of effective inﬂuencing actions.
Although they appear to be scientiﬁc, these models are based on the opinions of the members or the observers, and on their ability to observe "effective influencing actions." Over the years, I began to see some ﬂaws in that approach.
For instance, a company recently retained me to help a group of computer programmers improve their problem-solving techniques. The company was losing thousands of dollars of sales each passing day because of a subtle error in its software product. Until the programmers could ﬁnd the error, the product was useless. To help the group, I videotaped them as they struggled to ﬁnd the error.
In one hour of observation, the "effective inﬂuencing actions" of the four programmers involved looked like this:
Arnie 112 actions
Phyllis 52 actions
Weber 23 actions
Martha 0 actions
Martha's actions were easy to record. She sat like a zombie through the entire hour, studying the printout of the erroneous program. She said nothing, made no gestures, and didn't even smile or frown. Without question, she had no inﬂuence on the group whatsoever.
After consuming an hour with their effective inﬂuencing actions, the other group members were no closer to solving the problem than when they started. All of a sudden, Martha lifted her eyes from the listing, pointed a ﬁnger at one line, and said, ever so quietly, "This word should be '87AB0023', not '87AB0022'." Then Arnie, Phyllis, and Weber resumed their agitated discussion. They terminated the meeting ten minutes later, after they had convinced themselves that Martha was indeed correct.
When I asked the group who had been their most inﬂuential member, they all said, "Arnie." Then I played the videotape, asking them to be especially alert to the method by which their problem was solved. After watching the tape, Arnie, Phyllis, and Weber changed their answer to "Martha." Why? Because in terms of solving their problem, the table of effective inﬂuencing actions should have read
Arnie 0 actions
Phyllis 0 actions
Weber 0 actions
Martha 1 action


Without Martha's contribution, the meeting would have gone nowhere, yet non-programming psychologists would have probably missed Martha's role entirely. When such nontechnical psychologists observe our workshops, they are consistently befuddled by the dynamics of the teams as they solve technical problems. It's as if the psychologists were watching people from another planet, people whose culture and language look and sound superﬁcially like ours but are entirely different.
Posted by Gerald M. Weinberg at 8:23 AM