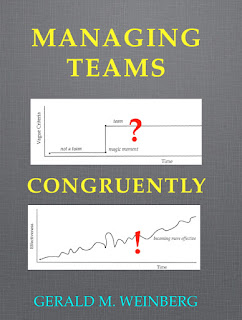 In these times of an Agile revolution in software, development managers have been hard taxed to keep up with the necessary changes in the way they must do their jobs to be successful. Whatever methods they used previously often fail to work when applied to the problems presented by Agile teams (or other teams, for that matter). To help them out, I've written the sixth volume in my Quality Management Series on the subject of managing teams congruently. What follows is the opening of that book...

Keep good natured ... no matter what you find ... you did not invent life, so do not hold yourself responsible for what life does to you; decline to lay blame on anyone. - Hugh Mearns

"Who was that masked man?" The townspeople never knew who the Lone Ranger was, but fans knew that his career as the masked defender of justice began in tragedy. He and his fellow Texas Rangers were ambushed by a gang of outlaws. He was the only one to escape with his life. He could have spent the rest of his life playing the victim, but instead he responded by building a new and more effective role for himself. The rest is (fictional) history—how the Wild West was tamed.

It's worth noting that the Lone Ranger possessed no secret weapon. The technology available to him was precisely what was available to the guys in the black hats. The difference was in the way he used his technology—and didn't use it. The typical bad guy had only one way to solve problems of control—namely, to gun somebody down. In remarkably few episodes did the Masked Man ever use his hardware, and then not to kill, but to disable the hardware of his opponent.

The Lone Ranger won the battle of Good over Evil because he had many behaviors at his disposal. He was clever, skilled with his hardware, persuasive, and, most of all, congruent. He never fired his gun in anger, or hatred, or revenge.

When the history of software engineering is written, the story will be the same: Thousands of individuals will respond to failure by playing victim, by pouring on hardware, or by attacking others. Only a few will respond congruently, creating new and more effective roles, and taming the Wild Profession.

Chapter 1. Curing the Addiction to Incongruence

An ounce of application is worth a ton of abstraction. - Booker T. Washington

Why do so many people respond incongruently in so many situations? For the most part, they continue to behave incongruently because they've become addicted to such behavior. So, if we're to improve the software professions, we'll need to know how to lessen incongruence—ideally, to cure it completely. This won't be easy. 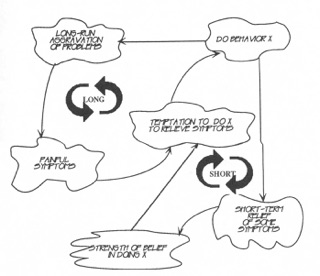 1.1 Force the Addict to Stop

The simplest idea about curing addiction to X is to stop the use of X, under the belief that X causes the addiction. X does not cause the addiction; the addiction dynamic causes the addiction. We know that's true because not everyone who is exposed to X becomes an addict. Take morphine addiction, for instance. Many people are exposed to morphine in hospitals and don't become addicted, because they have other ways of dealing with the various pains of their lives. Only those people who are inclined to believe (for personal, economic, cultural, or other reasons) that there is only one magical way to cure life's problems—only those people are likely to become morphine addicts.

The same is true, say, for the addiction to omitting various forms of testing (such as, technical reviews) to push the schedule. The only managers who become addicted to this practice are those who don't understand what the omitted testing would do for them, plus those managers who have no effective alternate ways of dealing with a schedule delay.

So, why not just forbid the skipping of planned tests? The biggest reason why not: there's absolutely no evidence that prohibition works, and lots of evidence that it doesn't. Sometimes it doesn't work because it's impossible to enforce the prohibition, as the entire population of the United States saw when alcohol was prohibited.

In the case where X is skipping of planned testing, the addict might try to make up the schedule by faking the records to show that skipped testing was not skipped at all. Skipping necessary testing always leads to buggier products, which eventually leads to punishing the addict for ineffective testing. Now the addict is in even more pain, and thus more tempted to speed up the next delivery by skipping more testing.

Or perhaps the addict manages to move to a new position and avoid responsibility for the buggy product. In that case, X "worked" for the addict, which strengthens the belief in X.

So, either the pain increases or the faith in the incongruent practice increases—or both. None of this looks like a "cure." 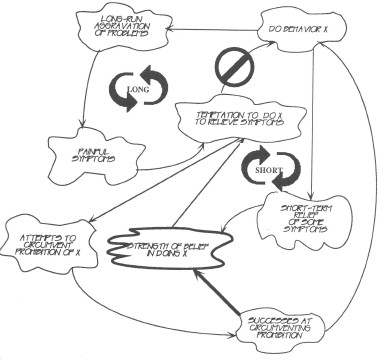 Figure 1-1. The simplest idea for stopping an addiction to X is prohibiting the use of X. This may lead to success or failure, but it always leads the addict to increasing efforts to do X because nothing is done about the long-range pain. If the prohibition works, the addiction may not grow stronger, but neither does it grow weaker. If it doesn't work, the addiction grows stronger, and new methods of evading the prohibition of X may now be learned.

Prohibition then cannot stop addiction, though at best it may stop new people from becoming addicts. Nevertheless, in a work situation, we may not care if the person or persons stay addicted as long as they cannot practice the behavior. For example, the prohibition of code-patching can be absolutely enforced with an appropriate configuration management system. When such a system is first introduced, programmers who are addicted to patching invariably try dozens of ingenious ways to beat the prohibition. If there's a crack, they will surely find it. If not, they'll eventually find that they may as well work within the system, albeit grudgingly. Their belief system remains unchanged, though, and given the slightest chance, they'll slip right back into the old behaviors.

Because the existing addicts will try harder and harder to beat the prohibition, the cost of this way of stopping the behavior is at least an increase in policing activity, with the accompanying deterioration in the general climate. Nevertheless, in circumstances like patch prevention with configuration management, the benefit can be worth the cost.

In other circumstances, however, it's simply not possible to obtain such absolute prevention. For instance, many software engineers are addicted to fiddling with software tools to the point where it interferes with their productive work. They are not addicted to tools, but to the overuse of tools. Because tools are a necessity for programming, there's no conceivable way management can stop these tool addicts from having access to their addiction.

At its worst, prohibition creates a class of people who profit from helping addicts beat the prohibition. This class of people then grows and recruits more addicts. A case in point is the tool vendors, who have a legitimate function, but who also may have no scruples about pandering to tool-based addictions. Why else would we find that 70 percent of purchased software tools are never used productively, yet few vendors will give their customers a refund for a returned tool?

What Else Can Be Done?

(The complete chapter is in the book. Subsequent topics include


plus many helpful hints and suggestions.)

Managing Teams Congruently can be found on Leanpub.com as a single volume.

It may also be found as part of the Bargain Bundle, Quality Software.
Posted by Gerald M. Weinberg at 2:44 PM

All of the images currently appear as broken links.

Peter
Thanks. I think I've fixed them now. I hope.
Jerry