The Parable of the Ones 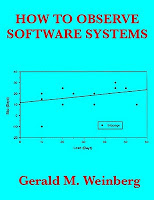 This little essay on the consequences of choosing the wrong measurements is taken from my book, How to Observe Software Systems

One way to avoid missing important observations is to observe everything. This strategy is neither humanly possible nor economically feasible. Resources devoted to observing one thing detract from the resources available to observe other things. Perhaps that's why some Routine managers are so fond of huge "metrics" programs—as a distraction from the things they really should be observing, but don't know how to observe without being overwhelmed.

Consider the Parable of the Ones:

Merlin the Manager was tired of being chastised by his boss, Wanda, for low programmer productivity. "How can I show you that the programmers are doing something," he asked her, "when all they're ultimately producing is ones and zeros."

"I'm not interested in zeros," Wanda complained. "Zeros are nothing. How many ones are they producing?"

"Well, you're their manager," Wanda accused. "You should know."

Merlin then hired some measurement consultants who showed him how to count the ones automatically in every object program, plotting them by project and programmer. The initial report showed an overall productivity of 43.78% ones, and Merlin called a meeting of all the programmers to chastise them about their low productivity.

"Look at this figure," he accused. "This means that 56.22% of all bits on memory are essentially unused—filled with zeros. Why, when I was a programmer, I could generate programs at random that were 50% ones. If this keeps up, there won't be any performance awards this year, I can assure you."

Two months later, just before the performance awards were decided, Merlin looked at his metric report and was delighted to discover that the overall productivity figure was 53.04% ones. He showed this report to Wanda, who gave him a big bonus. "Well," he thought, "that certainly shows the value of a measurement program. Now, as soon as I fire those two programmers with less than 45% ones, productivity will show another boost."

Merlin, of course, was merely illustrating DeMarco's principle. If he rewards programmers for ones, he'll get ones. Even without explicit rewards and punishments, the mere fact of observing something implicitly reinforces it. Workers always notice what their managers notice—and what they fail to notice. 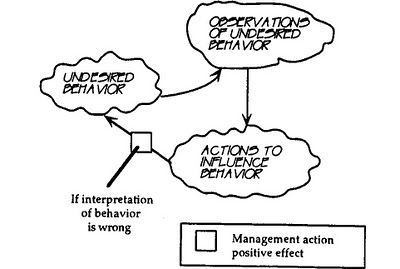 As often happens, Merlin's "measurement" system has produced a backwards effect from what the organization really wants (see diagram of effects on left). If he interprets the production of zeros as wasted effort, he encourages programmers to put effort into producing ones, which really is wasted effort. Much of the effort that might have gone into correct, well-performing software has gone instead into beating the measurement system.
Posted by Gerald M. Weinberg at 10:11 AM

"If you measure me in strange ways, don't be surprised if I begin to act strangely." Unknown

You might like this video of a TED talk called, What We Can Learn From Spaghetti Sauce. It includes a humorous review of some work by a psycho-metrics guru.