Why English Will Never Be 100% Automated: Example

One of the nice features of the Kindle eBook service is they way they copy-edit some of their better-selling books. This can be a particularly important service for print books that have been scanned to make eBooks. For instance, Amazon recently wrote about my Kindle book, An Introduction to General Systems Thinking:

Typo issues exist that may have been caused by an Optical Character Recognition (OCR) problem. Few examples are given below:

Please look for the same kind of errors throughout the book.

The first two instances are common OCR (Optical Character Recognition) errors: "T" for "I" and "1" (the numeral) for "I" (the capital letter).

The third example is a not quite so common OCR error, "l" (the letter) for "t". And, in this case, it's not an error at all.

The sentence in question was:

We do not often have our excessively sharp view of the world challenged by phenomena like Shasta the liger at the Salt Lake City Zoo, whose father was an African lion and whose mother was a Bengal tiger.

Still, the sentence contains a more subtle error: the failure of the author (me) to account for the mental state of the typical reader, for whom the term "liger" may be unfamiliar. (Even though it is found in at least 16 on-line dictionaries.)

I corrected this much more subtle error by redrafting the questionable sentence as:

We do not often have our excessively sharp view of the world challenged by phenomena like Shasta the "liger" at the Salt Lake City Zoo, whose father was an African lion and whose mother was a Bengal tiger.

As I dealt with this situation, I kept sighing and thinking, "English will never be entirely automated."

And then I took a deep breath and thought, "I suppose I prefer it that way."

How about you? Would you like English to be entirely clear and logical? 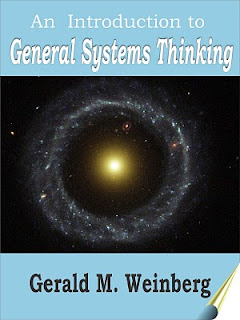 An Introduction to General Systems Thinking
Posted by Gerald M. Weinberg at 11:11 AM