Here's a letter I recently received from Agnes, one of my writing colleagues. I think it illustrates yet another one of the indirect changes arising from the changes in publishing technology. Here's the letter, followed by my response. (Edited, of course, to protect identity.)

Currently I feel like I'm moving through molasses, going incredibly slow, and not getting anything done. I guess I've been feeling like that all year, since I began epublishing a year ago.

I've been annoyed with myself, because this past month, I've only gotten one chapter written on my new novel. I haven't got another novel in print yet though it is up electronically, and I've only gotten one more novel up on Smashwords and Pubit and not on Amazon yet. Blah. It's a strange feeling, like I'm just not moving at all.

But when I look back over the year as a whole, I have to think that feeling of not getting anything done is an illusion. Since last October, I've published electronically a dozen books and half-a-dozen short stories. And put eight of those books out in print.

What I can't figure out is why it feels like I'm not getting anything done at all, when if fact I'm being somewhat productive. It's just crazy.

Not crazy, Agnes. Just unfamiliar. I've been feeling the same way ever since I started publishing electronically, and I've put up over forty books.

I think, for me, it's not experiencing the various "mileposts" of traditional paper publishing: the letters back and forth from and to various editors, the contract, the galleys, the phone calls, the page proofs, more letters, the cover designs, ...

I didn't realize it all these years, but these mileposts made me feel I was accomplishing something—though of course I now realize they meant just the opposite. They were all delays, preventing me from seeing my work "in print."

Now, once I finish my part(s) of the publishing job, it's finished. Done. Ended. And on sale and earning royalties. And I'm left with the feeling I haven't really done that much.

One thing that helps me is watching the sales figures climbing every day. I know some of our colleagues say you shouldn't do that, but it takes less than five minutes a day. Those five minutes give me a sense of accomplishment, a sense that motivates me to do more work that day. 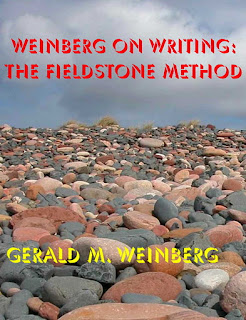 Anyway, that's the way it is for me. Perhaps it's something similar for you.

If you enjoyed this little essay, take a look at Weinberg on Writing, The Fieldstone Method. You can find it listed at these stores

http://blog.flowkaizen.com/why-physical-card-walls-are-important might help. It would be fun to try the balloons!

First, read Brian's terrific article, and look at the pictures.

My reaction is this: The balloons might help Agnes even more if they were used for "work accomplished," rather than "work to be done."

Sure, she could look at the lists of writings she'd posted on the web, but I can attest that mere lists don't have the impact she might feel from being surrounded by balloons.