There's nothing more practical than a good theory. - Kenneth Boulding

Reading a book is one thing. Applying what you learn is quite another. If you don't apply it soon, it simply fades away. The same is true of any educational experience. If you come back from a class and don't start using some of the material, you may as well not have gone in the first place.

The Challenge
Your challenge is to review the chapters in any of the four Quality Software Management volumes concerning specifics of the Anticipating organization and consider each idea in terms of the artistry that you can use to introduce it to your organization. Try to create at least one specific action item that will advance the transformation to that way of doing things.

Experiences
1. I started a brown bag special-interest group on our new CASE tool as a place for people who were using it to share learnings, and as a low-risk place for those who weren't using it to find out about it. The hardest part for me—and the real challenge—was to be the first speaker. I haven't been a person who enjoys speaking in front of groups, but I got some support and made myself do it. The group now runs on its own—with little nudges from me once in a while—and there's no trouble getting speakers. It has tripled in size as our use of the tool has grown, and people think that without the group the tool would have died in the original group, or at least not spread.

2. I set out to measure something that would be useful to upper management and to the people whose work was being measured. After a few false starts, I hit upon measuring resolution time for failures found in test. I set up a system to capture this data from our bug database and to plot it automatically week by week. One of the surprising things it showed was the way the new configuration management system actually slowed down resolution time. Since I was advocating the new system, I was rather disappointed, but I resisted the temptation to fudge the figures. Management wanted to throw the system out, but I invoked the Satir Change Model to get a few weeks grace period. With the help of some investigation into the causes of Chaos, the graph improved. In about three weeks, the resolution time was back to what it was before the tool, and after six weeks, the time was cut by 32%. This was the first time anyone had ever demonstrated the value of a new tool in our organization.

3. My challenge to myself was to open up information in my organization. To do this, I decided to be the model by using Public Project Progress Posters for the three projects I'm managing. I was surprised by the emotional reactions—mine and others'. I was apprehensive and defensive, yet proud of my courage. One of the other managers came into my office, shut the door, and started screaming obscenities at me for embarrassing him (because he wasn't going to post his progress). The people in the projects were generally accepting, though I spent a lot of time in the next two weeks explaining how to read the posters, what certain slippages meant, and what I was going to do about them. It was a lot more trouble than I anticipated, but now that things have settled down, it seems to be worth it. 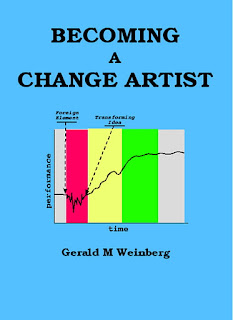 This post is part of the series, adapted from the book, Becoming a Change Artist.
Posted by Gerald M. Weinberg at 12:14 PM