The History of an eBook 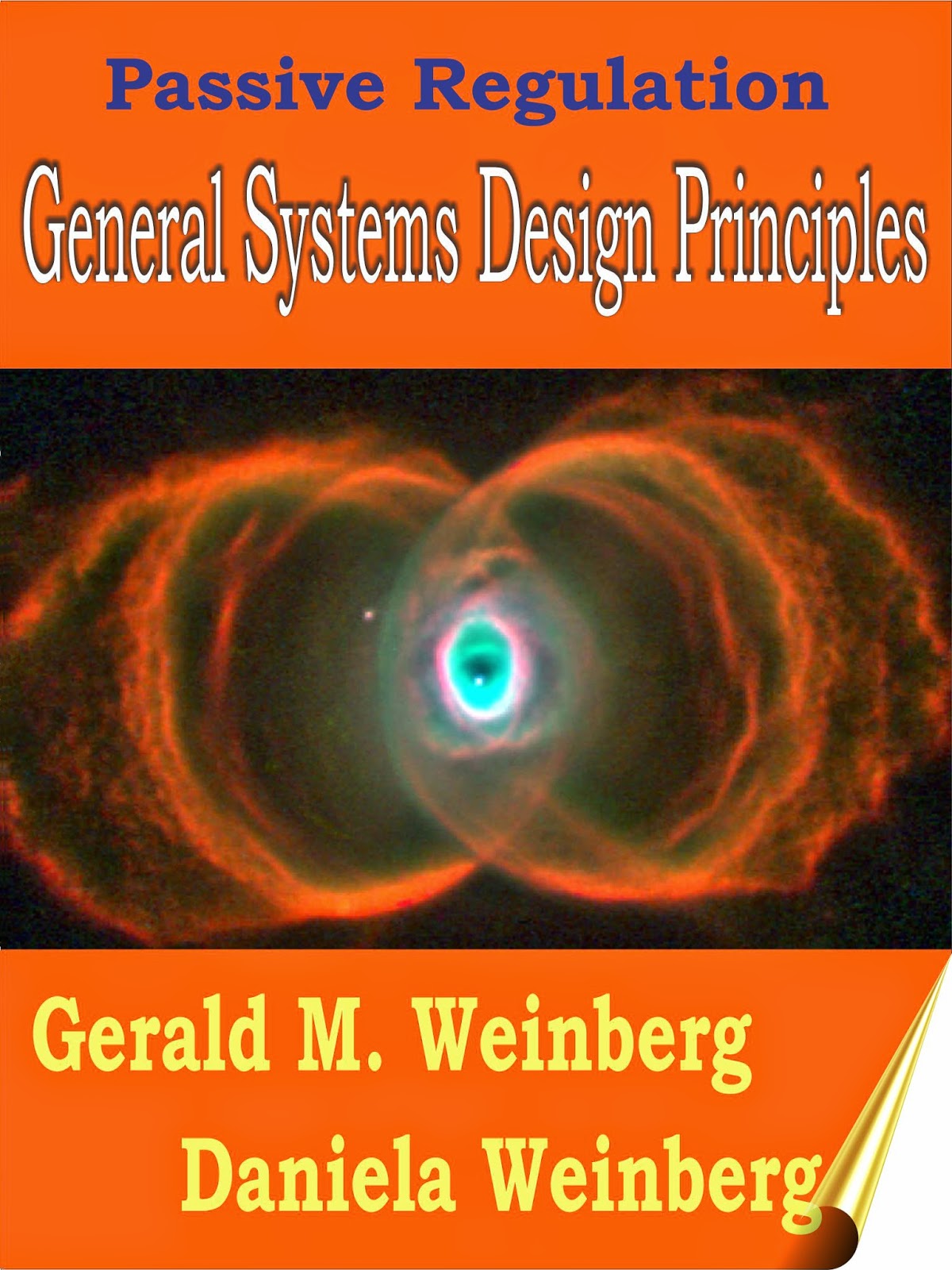 I'm a bit late with this latest excerpt from one of my books. I was a bit busy last week, doing the grunt work of formatting a ebook (the fourth editioin of The Handbook of Technical Reviews), correcting typos in another (What Did You Say?), updating software and hardware, and having my eyes replaced (corneal transplants).

Speaking of new eyes, that's pretty much what this week's post is about: General Systems Design Principles: Passive Regulation, which Dani and I co-authored. This week, I'm printing excerpts from the preface to that book, which should give you some sense of what it's about and how it came about. Next week, I hope to publish an excerpt from the companion volume, General Systems Design Principles: Active Regulation, which Dani and I also wrote together. This Preface actually introduces both books, which form volumes 2 and 3 of my General Systems series. But more of that later.

Preface to the E-book Edition
With books, as with children, you never know what you've produced until they've grown up. When Jerry's book An Introduction to General Systems Thinking was first published, we imagined it would be used by practical systems designers in a variety of disciplines, not as a university text. To be sure, Dani used it in a graduate seminar in Anthropology, but she was biased. Then, after a few years, Jerry was surprised yet delighted to discover how many other courses were using it.

About the time of that discovery, we first published parent of this volume, under the title On the Design of Stable Systems. Looking at the original preface, it's easy to see that―perhaps influenced by the earlier companion volume―we thought we were producing an academic work. That impression undoubtedly influenced the title, leading us to the rather abstract and distant sounding On the Design of Stable Systems. (We actually received purchases from some horse owners who wanted to design stables for their mounts.) It also influenced the original publisher to promote the book solely as a text, where it was only moderately successful.

On the other hand, some very practical people managed to discover the book despite the publisher's promotion. We received many kind letters testifying to its practical usefulness—and complaining about the title. So, when the opportunity came to reprint the book, we sought to make two changes. First, we found a publisher who was more attuned to the people who design and build real systems in the real world. Second, we changed the title.

The new title, we hope, gives just the right impression of the book's contents and usefulness. It is a practical book about systems design―not just computer systems, but information systems in the larger sense: human organizations of all kinds, and systems in nature, like organisms, species, or forests.

With such a general scope, it obviously cannot be a "nuts and bolts" or "recipe book, yet it has many extremely practical applications to the daily work of people who design, for example, information processing systems, training programs, business organizations, parks, or cities.

The field of software development has recently become enamored of "methodologies"―integrated step-by-step approaches to developing and maintaining systems. Ours is not another methodology book―though the general principles we describe have an ancestral relationship to some of the popular methodologies. We believe they will make learning any methodology easier, because they are general principles―the sorts of things you need to know regardless of what methodology you use, or what kind of system you're designing or deciphering.

We considered using the title The Secrets of Systems Design, after Jerry's book The Secrets of Consulting, but we thought that would be confusing. It is about "secrets," though―the deep thinking processes we use in our consulting and practice. These general ways of thinking about systems enable us to get quickly to the heart of existing organizations and information systems, to visualize new systems, and to design training and other interventions to catalyze the transformation from one to the other. Although we don't promise that such deep insights are easy, we've seen how much they can empower you. In the end, that's the only good reason for publishing a book, whatever the title.

Now, as we enter the e-book era, we've made some further changes to make the book more accessible. Based on reader feedback, we've come to realize that we had written two books in one. Both books are about stability and design, but the first half of the original book was about passive stability—through aggregates. We have separated out those first eight chapters for this volume: Passive System Regulation: General Design Principles. We've done this to make each book more focused and less expensive. We hope they now better fits your needs as a reader.

Original Preface
This book is the result of an 18-year collaboration between two people, in two different disciplines, who share a fascination and love for the human animal. Whether from the vantage point of computers or anthropology, we are excited by the capacities of the human mind and alarmed by some of its products.

Our disciplines seem to begin at opposite poles―machine systems and social systems―but they converge as soon as people enter the picture. Thus the social scientist is concerned with the cultural meaning of "math anxiety," while the computer scientist teaches programmers to overcome their "people anxiety."

Both our disciplines daily come to grips with the subtle interplay between system and environment. Cultures and computers both exhibit the effects of adaptation to a constantly changing environment. And anthropologists and computer scientists equally balk at the difficulties of studying conservation and persistence.

This collaboration has been nourished, too, on another level. Our professional activities oscillate between the abstract and the concrete, the theoretical and the practical. The computer scientist designs program logic and enables people to work productively in teams. The anthropologist wrestles with concepts in the classroom and drinks wine with natives in the field. We are accustomed to switching modes, shifting communication styles, all the time. It is perhaps this instability in our professional lives that has taught us to value uncertainty and to make a virtue of indeterminacy.

General systems thinking has been, for us, a way of understanding the complexity of our own lives. We sincerely hope it will be the same for you.