The Tenth Law of Pricing 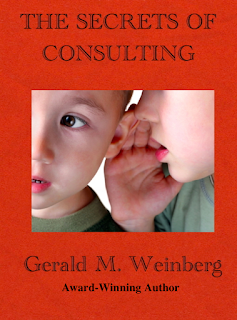 As a reply, I suggested reading my book, The Secrets of Consulting. The questioner then asked if I could supply a sample, so I provided a little sample from the book. In the chapter on pricing, I give my ten Laws of Pricing—laws that have made numerous consultants rich. I won’t explain them all here (or else I won’t get rich from sdelling my books), but I’ll give a summary along with the section about the tenth law:

FEE AS FEELING: THE TENTH LAW OF PRICING

The previous nine laws may sound overly analytical, but I don't perform this balancing act in any particularly analytical way. I just lay out several prices in a range and than imagine myself in a situation in which I'm turned down and am sitting at home, or the situation in which I've accepted and I'm doing the job. As I imagine myself in each of these situations, I notice my feelings. I ﬁnd these fantasy feelings a particularly reliable guide to how I'm going to feel in the actual situation. Based on where I feel best on all sides, I set my price.

If the procedure sounds fuzzy, you may want to review the pricing laws:

1. Pricing has many functions, only one of which is the exchange of money.
2. The more they pay you, the more they love you. The less they pay you, the less they respect you.
3. The money is usually the smallest part of the price.
4. Pricing is not a zero-sum game.
5. If you need the money, don't take the job.
6. If they don't like your work, don't take their money.
7. Money is more than price.
8. Price is not a thing; it's a negotiated relationship.
9. Set the price so you won't regret it either way.

If you examine these laws, you'll realize that they don't talk about rationality, but emotionality. In other words, underlying all the other laws of pricing is The Tenth Law:

All prices are ultimately based on feelings, both yours and theirs.

Oscar Wilde once said that people know the price of everything and the value of nothing. Since Wilde's time, however, things have gone downhill. Now people don't even know their own price. Not consultants, anyway. There may be some consultants in the world who never wonder whether they've set the right price on their heads, but I've never met any. I've concluded that, in the case of consultants, Wilde was wrong. Consultants have so much trouble talking about prices because they know their value only too well. Or, they secretly fear that they know.

So, if you're having problems setting a price on your head, take a good look at your deep feelings of self-worth. You're probably not worth as much as you hoped. On the other hand, you're probably worth a lot more than you feared.