It isn’t what we don’t know that gives us trouble, it’s what we know that ain’t so. - Will Rogers

The first step to knowledge is the confession of ignorance. We know far, far less about our world than most of us care to confess. Yet confess we must, for the evidences of our ignorance are beginning to mount, and their scale is too large to be ignored!

If it had been possible to photograph the earth from a satellite 150 or 200 years ago, one of the conspicuous features of the planet would have been a belt of green extending 10 degrees or more north and south of the Equator. This green zone was the wet evergreen tropical forest, more commonly known as the tropical rain forest. Two centuries ago it stretched almost unbroken over the lowlands of the humid Tropics of Central and South America, Africa, Southeast Asia and the islands of Indonesia.

... the tropical rain forest is one of the most ancient ecosystems ... it has existed continuously since the Cretaceous period, which ended more than 60 million years ago. Today, however, the rain forest, like most other natural ecosystems, is rapidly changing. ... It is likely that, by the end of this century very little will remain. - Karl Deutsch

This account may be taken as typical of hundreds filling our books, journals, and newspapers. Will the change be for good or evil? Of that, we can say nothing—that is precisely the problem. The problem is not change itself, for change is ubiquitous. Neither is the problem in the man-made origin of the change, for it is in the nature of man to change his environment. Man’s reordering of the face of the globe will cease only when man himself ceases.

The ancient history of our planet is brimful of stories of those who have ceased to exist, and many of these stories carry the same plot: Those who live by the sword, die by the sword. The very source of success, when carried past a reasonable point, carries the poison of death. In man, success comes from the power that knowledge gives to alter the environment. The problem is to bring that power under control.

In ages past, the knowledge came very slowly, and one man in his life was not likely to see much change other than that wrought by nature. The controlled incorporation of arsenic into copper to make bronze took several thousand years to develop; the substitution of tin for the more dangerous arsenic took another thousand or two. In our modern age, laboratories turn out an alloy a day, or more, with properties made to order. The alloying of metals led to the rise and fall of civilizations, but the changes were too slow to be appreciated. A truer blade meant victory over the invaders, but changes were local and slow enough to be absorbed by a million tiny adjustments without destroying the species. With an alloy a day, we can no longer be sure.

Science and engineering have been the catalysts for the unprecedented speed and magnitude of change. The physicist shows us how to harness the power of the nucleus; the chemist shows us how to increase the quantity of our food; the geneticist shows us how to improve the quality of our children. But science and engineering have been unable to keep pace with the second-order effects produced by their first-order victories. The excess heat from the nuclear generator alters the spawning pattern of fish, and, before adjustments can be made, other species have produced irreversible changes in the ecology of the river and its borders. The pesticide eliminates one insect only to the advantage of others that may be worse, or the herbicide clears the rain forest for farming, but the resulting soil changes make the land less productive than it was before. And of what we are doing to our progeny, we still have only ghastly hints. 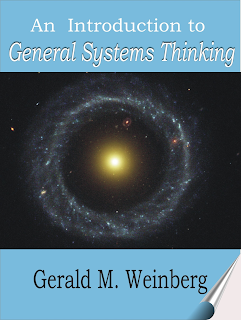 And then, having laboriously purged our minds and hearts of “things we know that ain’t so,” we shall be ready to map out our future general systems tasks, tasks whose elaboration lies beyond the scope of this small book.

[Thus begins the classic, An Introduction to General Systems Thinking]