How do I become a programmer who gets stuff done?

The young man wanted to know, "How do I become a programmer who gets stuff done?" He received a number of good answers, like how to organize his work and schedule his working hours. Yet I had a different view of things, so I gave a different sort of answer, as follows.

Some good advice here, yet even if you do all these suggested things, you may be having a different problem. When you speak of getting stuff done, you may be speaking of “finishing” things.

NTs tend to think a project is done when they have a clear description of the problem and a general approach to solving it. Someone else can work out the details.

SJs tend to think a project is done when it’s “code complete”—though research at Microsoft and other places seems to indicate that only about two-thirds of the eventual code has been written by that supposed benchmark. Perhaps this work isn't thought of real programming, but only "clean up."

NFs, such as me, tend to think that a project is done when everyone involved is satisfied that it’s done. Of course, because these "others" are of various personality types, our NF estimate of "done" isn't very reliable.

SPs tend to think a project is done when they are bored with doing it. They share this feeling with lots of other temperaments, too. Programmers in general don't tolerate boredom very well.

Not taking that last step to "clean up" is a curse of our profession, leaving many programs in a less-than wholesome state. Unclean, unfinished programs are the source of many maintenance problems, and of many errors shipped to customers.

Of course, this classification is only a rough model of non-finishers. Many good programmers of all temperaments are excellent finishers, having taught themselves to be aware of their tendencies and counter them with a variety of tactics. Primary among those tactics if the technical review by peers (which is an integral part of the Agile approach but  by no means is not confined to Agile). 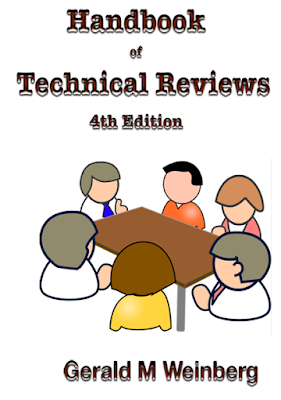 So, you offer your “finished” project to your peers for review, and if they agree that it’s finished, you’ve truly gotten something “done.”

If they don’t agree that your work is done, they will give you a list of issues that you need to address before you’re “done.” You then go back to work and address these issues, then resubmit the newest version to another technical review.

Finally, you iterate in this reviewing process until your work passes the review. Then you know you’ve gotten something done.

For more detail on the review process, see,