What's it like to rewrite a program from scratch?

This is an interesting question because so many programmers are so afraid of this task that they would never even ask it. Is this reluctance agile, or Agile?

But why would you want to do rewrite a program from scratch? The most important reason is to increase maintainability. In the initial writing, the focus is generally on merely getting the job done, without thinking of the program's future. Over their lifetime, many programs cost far more to maintain than to write originally, especially when the original program has become a thing of rags and patches.

A second, and often secondary reason to rewrite a program is efficiency. Newly constructed programs and highly patched old programs sometimes turn out to be slower than desired, but such inefficiency cannot erased by any amount of tweaking. Instead, increased efficiency requires a new approach, an approach that needs to be implemented from scratch.

But isn't rewriting expensive? Not usually. In fact, it’s generally far, far easier to rewrite a program from scratch than to write some brand-new program.

Those questions—requirements and test—usually make up more than half the total work put into a program. They have already been answered—but only if you resist the temptation to change those answers. If you don’t resist, then rewriting the program can be arbitrarily difficult. 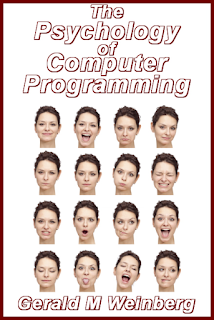 The Psychology of Computer Programming: Silver Anniversary eBook Edition
Posted by Gerald M. Weinberg at 9:43 AM